Factorization and Division Methods for finding  HCF and LCM

If n1 and n2 are two numbers

n1 is divisor , n2 is dividend and remainder came zero than n1 is divisible or factor of n2

The word ” divisible appears in a question, it means ” it divides equal parts or divisible without remainder.

If take numbers n1, n2, n3, n4, n5 and x is the common divisible number for all these numbers

HCF of two or more than numbers is the greatest number (divisor) that divides all the given number exactly. So HCF is also called the greatest common divisor(GCD).

Some important tips on HCF

There are two methods to find the Highest Common Factor (HCF)

Let we have three numbers .Pick the smaller one and divide it by the larger one. After that divide the divisor with the remainder. This process of dividing the preceding number by the remainder will repeated until we got the zero as remainder.The last divisor is the required H.C.F.

Step 3 : The divisior 150 comes to divident place and remainder 75 act as a divisor than here quotient comes 2 and remainder having “0”.

Step 4 : Now take numbers 75 and 210 than follow the above process until we got the  remainder as zero. 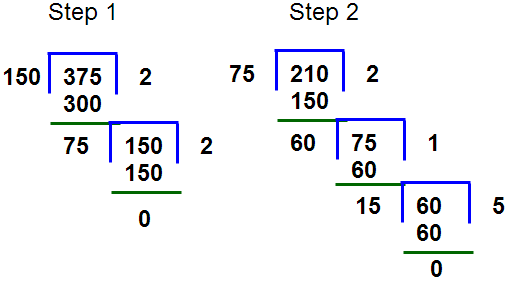 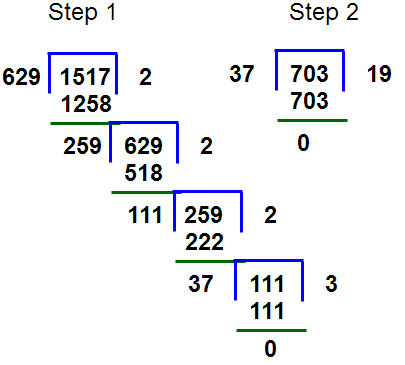 Steps for finding HCF of two numbers x and y

Step 2 : Write the prime factors common to all the three numbers is 51 x 31 ( Here powers of the numbers to be take lowest values)

Step 2 : Write the prime factors common to all the three numbers is 1071 ( Here powers of the numbers to be take lowest values from all the common prime factors)

LCM is the least dividend which is exactly divisible by given numbers.

Suppose If numbers n1 and n2 are two numbers distinct from each other. The smallest natural number “x” that is exactly divisible by n1 and n2 than “x” is called least common multiple (LCM) of n1 and n2.

Some important tips on LCM
For two numbers x and y if x < y, then L.C.M. of x and y is more than or equal to y.

There are two methods to find the LCM 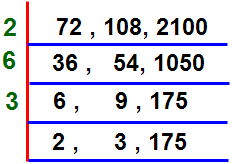 Steps for finding LCM of two numbers x and y

Formula for finding HCF and LCM of fractions.

1. HCF of two or more fractions is given by

2. LCF of two or more fractions is given by

Step 2 : Write prime factors of all numbers of numerator and denominator

Step  3 : Find HCF and LCM of numerator and denominator

Step 4 : According to the above formulas we can find the answers

For more sums on GCD and LCM Problems & Solutions 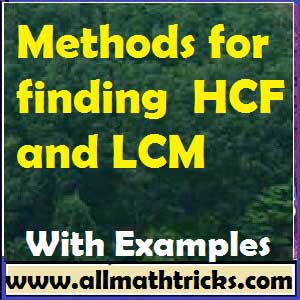 Hi friends Thanks for reading. I Hope you liked it.  Give feed back, comments and please don’t forget to share it.

In this logarithm tutorial explained about logarithm applications with examples and solutions based the logarithmic formulas as per...

Basic Concepts of logarithms | Log properties | Logarithm without base

In this session we know about basic concepts of logarithms like definition of logarithm with examples, common logarithms, natural...