Basic concepts of sequence and series

Progressions are of three types. They are

Arithmetic Progression can be defined as, a sequence of numbers is obtained by adding a fixed number “d” to the preceding term except the first term.

Each of the number in the list of an arithmetic progression is called a term of that A.P.

The difference between two succeeding terms of an Arithmetic Progression is called common difference. The difference value can be positive,negative or zero.

rn is also called general term of the A.P

Using the above formula we can find different terms of the A.P

General notation of nth terms of an Arithmetic progression

Formula for finding the sum to first nth  term an A.P

then the sum of the A.P is

4.  The nth term of Arithmetic Progression is the difference of the sum to first “n” terms and sum of first (n-1) terms of it. 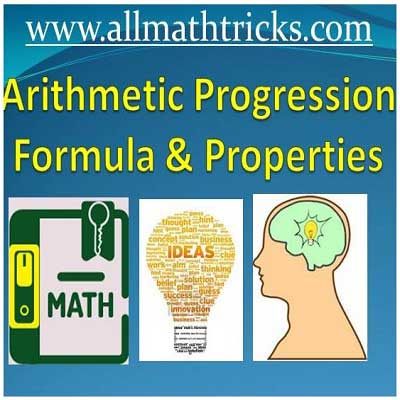 Relationship Between AM, GM and HM

In this session explained about Geometric Progression formulas of nth term, Sum of first 'n' terms of a G.P, Properties of Geometric...