In the sequence, each term is obtained by multiplying a fixed number “r” to the preceding term, except the first term is called Geometric Progression.

i.e Quantities are said to be in Geometric Progression when they increase or decrease by a constant factor. The constant factor is also called the common ratio.

The ratio of a term in G.P to its preceding term is called ” Common Ratio” of that G.P.

Finding the common ratio of G.P

In the above G.P the ratio between any term ( except 1st term) and its preceding term is ” r”

Sum of first n terms of a Geometric Progression

Sum of infinite G.P is

If three quantities are in geometrical progression, three middle one is called the geometric mean between the other two.

d) If ‘a’ and ‘b’ are two numbers of opposite signs the Geometric mean between them does not exist.

Thanks for reading this article. I Hope you liked this article of “ Geometric Progression Formulas and Properties ”. Give feed back and comments please. 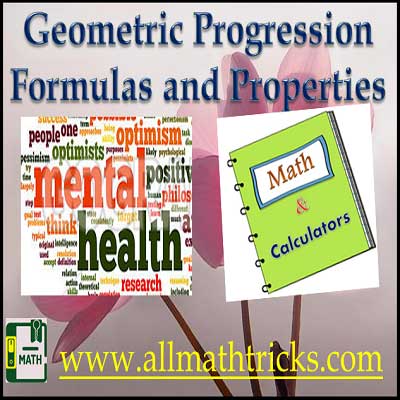 Relation between AM, GM and HM

In this session explained about arithmetic progression problems like finding the nth term , sum to first nth terms, finding the number of...