In this article we can learn about types of pyramids and geometrical formulas of surface area and volume and its properties.

A pyramid is a three dimensional solid shape which can have any polygon as its base and its edges converge a single vertex or apex.

Its dimensions are defined by dimensions of the polygon at its base and length of its lateral edges which lead to the vertex.

The type of the pyramid is called to according to its base.

The base is triangle type then it is called Triangular pyramid.

If the base is square type then it is called Square pyramid.

If the base is pentagonal type then it is called Pentagonal pyramid.

Perimeter of a pyramid (p) : It is a distance around the base of the pyramid.

Slant height of a pyramid ( l) :  It is a diagonal height from the vertex to center one of the base edges.

Height/Altitude of  pyramid ( h) : Altitude ( h) is the perpendicular distance between the apex and bases of a pyramid.

Right Pyramid – The Vertex or apex of the pyramid is directly above the center of its base, then it is called right pyramid.

i.e The apex line is perpendicular to its center point of its base.

The square pyramid, triangular pyramid are examples of a right pyramid.

Slant surface or lateral surface area of the pyramid (S)

SA = Lateral surface area of the pyramid + Base are of pyramid

Volume of the pyramid (V) 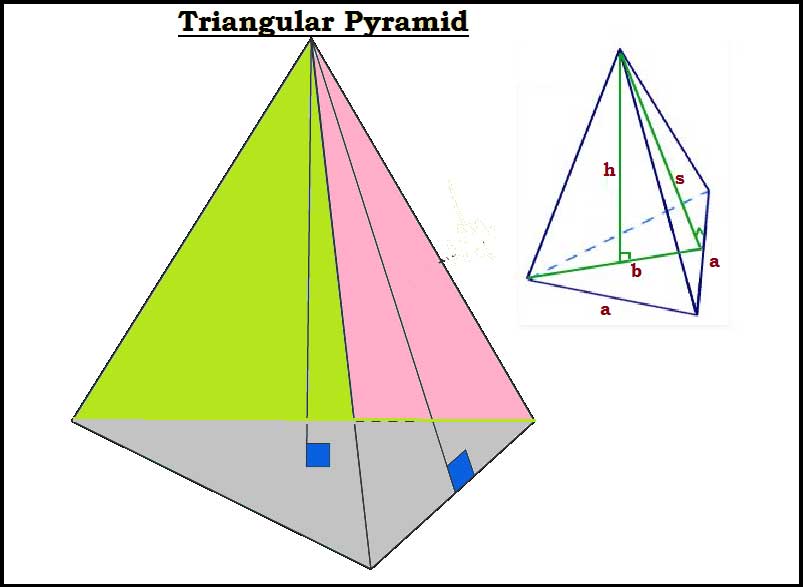 Height of the triangular pyramid – h

Base length of the triangular pyramid – a

Surface area and volume of a triangular pyramid

Base Area of a Triangular Pyramid

Volume of a Triangular Pyramid (V)

A square pyramid is square based three-dimensional geometrical figure. All the four sides are triangular and they are meet at one single point known as apex.

A Square  pyramid has

Base Area of square pyramid (A)

Slant surface or lateral surface area of the pyramid (S)

Volume of a Square Pyramid (V)

Where ” s ” is the slant height, “a” is the base length and “h” is the height of the of the square pyramid

A Pentagonal pyramid has 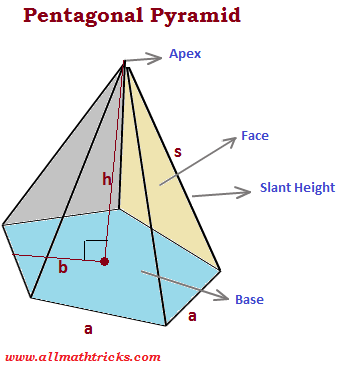 Volume of a pentagonal pyramid (V)

Slant surface of the frustum of a pyramid (S)

Volume of the frustum of a pyramid (V)

Frustum of cone formulas with examples

Centroid of the triangle formula with examples

Surface Area and Volume of a Prism Formulas

Quadrilateral formula for area and perimeter