In this article discussed about basic concepts, Important Formulas, Properties with Quantitative aptitude shortcuts & tricks of ratio proportion and variation

Ratio Proportion and Variation aptitude formulas for all Competitive Exams

When compare any two numbers, some times it is necessary to find out how many times number is greater or less than other .

In other words, we often need to express one number as a fraction of other.

In general, the ratio of a number P to a number Q is defined as the quotient of the number P and Q

Ratio is a comparison in division method P, Q ratio is P : Q

Here P is called Antecedent and Q is called Consequent.

For example: Find consequent value for the ratio of 5 : 4 and antecedent is 20

For antecedent 5 gives 20 then

The proportion is represented as

Variation deals with how one quantity varies with respect to one or more other quantities.

A quantity ‘A” is said to vary directly as another ‘B’ when the two quantities depend upon each other in such a manner that if B is changed , A is changed in same ratio.

The symbol ‘ ∝ ‘ is used to denote variation.

Essentially there are two types of variations known as direct variation and inverse variation.

i.e If A increased then B is also increased. (Logical variation)

In the direct variation the ratio of A/B is constant

Direct variations can be expressed as A = kB, where, k is called the constant of proportionality.

i.e If A increased then B is decreased. (Logical variation)

If A increased by 10% then B is decreased by 9%. (Calculation implication)

Inverse variation can be expressed as A = k/B  where, k is called the constant of proportionality

Impotent formulas and portieres of Ratios and Proportions

Property : 1 ( Multiply or divide of ratio)

If we multiply or divide the numerator and denominator of a ratio by same number, the ratio remains unchanged.
For example

For example a / b and p / q are two fractions then

Now compare the values of aq and bp

then each ratio is equal to

Now according to property – 1

Now by the property of Equal Ratios

If the ratio p /q > 1  ( i.e A ratio is called greater inequality) and if N is  a positive number then

The ratio of the addition should be equal to the original ratio to maintain equality of ratios when two different numbers are added the numerator and denominator.

For example : If p/ q is the ratio then

if and only if

If the three quantities a, b & c are in continued proportion, then

‘a’ is called 1st proportion

‘b’ is called mean

If three quantities quantities are proportionals the first is the third is the duplicate ratio of the first to the second.

When the ratio p/ q is compounded with it self, then

1. Calculating the ratio by percentage and decimal values

Thanks for reading this article. I Hope you liked this article of “ Ratio proportion and variation formulas ”. Give feed back and comments please. 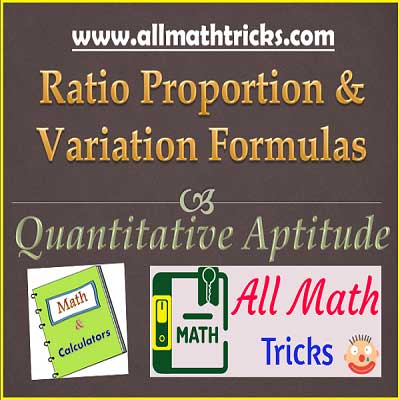 How to Find Unit Digit of a Power Number