The Concepts of number system the mathematics

The number system mainly into classified into 8 types. 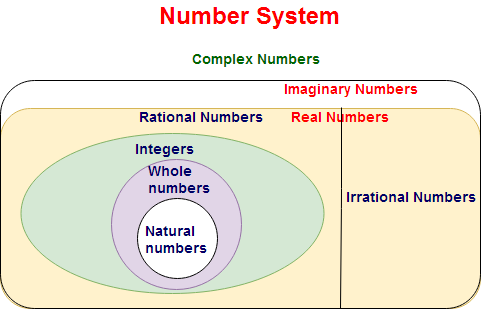 Every number in number system taken as a complex number

A number does not exist in the number line is called imaginary number. For example square root of negative numbers are imaginary numbers. It is denoted by ” i ” or ” j “

So there is no real number i that satisfies the above equation.  The quantity ” i” is called the unit imaginary number.

All numbers that can be represented on the number line are called real numbers.

Real Numbers are denoted by “R”.

A rational number is defined as number of the form x/y where x and y are integers and Y # 0.

i.e Any number which can be expressed as in the form of p/q where “p” and “q” are the integers and q # 0

The set of rational numbers encloses the set of integers and fractions.

The rational numbers that are not integral will have decimal values. These values can be of two types

Non terminating non periodic fractions : These are non terminating and there is no periodic decimal places for that number . i.e a. b1b2b3b4b5  …..bmc1c2………

So from above terminating and non terminating periodic fraction numbers belongs to rational numbers.

An Irrational numbers are non terminating and non periodic fractions. i.e irrational number is a number that cannot be written as a ratio x/y form (or fraction).  In decimal form, is never ends or repeats.

4. Integers ( numbers having no decimals )

All numbers that do not having the decimal places in them are called integers.

i.e the integer it may positive or negative or zero.

The set of integers generally written  Z for short.

Any integers are added, subtracted, or multiplied the result is always is an integer.

When any integers multiplied , each of the multiplied integer is called a factor or divisor of the resulting product.

The set of whole numbers means narrator numbers and “0”

The counting numbers start with 1 and their end is not defined. Generally it is  denoted by “N”

Another Some important number system :

The integer is less than zero than it is called negative integer.

The set of numbers Zero and natural numbers  is called non negative integers.

The integer is greater than zero than it is called positive integer. The set of natural numbers  is called non negative integers.

The integer is less than zero and include zero than it is called non positive integer.

A number having one more divisor apart from 1 and itself is called composite number.

i.e When two or more numbers having no common prime factors apart from the number ” 1″ , they are called co-prime  or relatively prime to each other.

Even and Odd numbers:

A number which is a multiple of the number “2” than it is called even number. The even number can be represented by “2n” . here n is natural number.

A number which is not multiple of the number “2” than it is called odd number. The odd number can be represented by “2n+1” . here n is natural number.

Operation of Even and Odd numbers:

Even x Even = Even

Odd x Even = Even

Odd / Even = Not divisible.

Any number  is called perfect number, if the sum of all its factors excepting itself is equal to the number itself .

So the number ” 6 ” is called perfect number.

In this logarithm tutorial explained about logarithm applications with examples and solutions based the logarithmic formulas as per...

Basic Concepts of logarithms | Log properties | Logarithm without base

In this session we know about basic concepts of logarithms like definition of logarithm with examples, common logarithms, natural...

4 thoughts on “Number System in Mathematics”