In this section we know about definition of angle in geometry and its types of angles like Interior and Exterior of an angle, Zero Angle, Acute Angle, Right Angle, Obtuse angle, Straight Angle, Reflex Angle & Complete angle

An angle is formed when two rays originate from same end point. The two rays formed an angle are called ‘arms or ‘sides ‘ of the angle and the end point is called the vertex of the angle.

An angle is denoted by the symbol ” ∠ “ 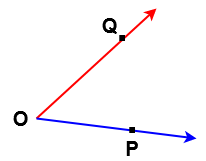 Here the rays OP, OQ from an angle denoted by ∠POQ or ∠QOP.

Sometimes, the above angle by written by the letter at the vertex of the angle. For example , in the above figure the angle ∠POQ is also denoted by “ ∠O ” or angle O 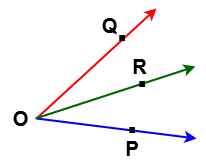 In the above figure angles are named as follows

The standard unit for measuring an angle is degree.

Degree is defined as 360th part of one complete revolution.

One complete revolution is equal to 360 degree or 360o

One degree is further divided into 60 equal parts. Each equal part is called one minute and it is written as  1′

One minute is further divided into 60 equal parts. Each equal part is called one second  and it is written as  1″

Interior and Exterior of an angle

Interior of an angle : The part of the plane which is within the arms of an angle produced indefinitely is called the interior of the angle. 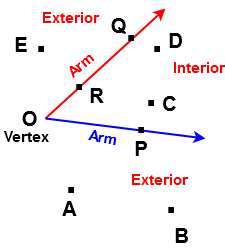 Interior of the angle : The points in the interior – C & D

Exterior of the angle : The points in the exterior – A, B & E

The angle is formed by initial and final position of a ray coincide without making any revolution. Thus whose measure is Oo is called zero angle.

In the above figure ∠POQ = Zero angle = Oo

In the below figure ∠POQ is called acute angle. 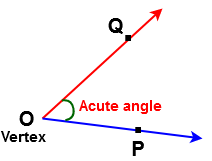 The right angle is defined as ” If the initial position of the ray OP is horizontal and it rotates to occupy vertical position OQ then we say that angle formed is a right angle .

Thus , the angle whose measure is 90o is called right angle. 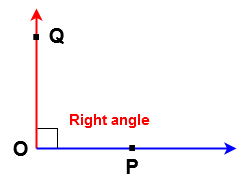 The angle whose measure is greater than 90o but less than 180o is called obtuse angle.

In the below figure ∠POQ is called Obtuse angle. 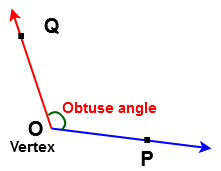 The straight angle is formed when the initial and final position of a rotating ray opposite to each other.

The angle by two opposite rays OP and OQ is a straight angle since they form a straight line PQ and this is half of one complete angle.

The angle whose measure is more than 180 o and less than 360o is called reflex angle.

In the below figure ∠POQ is called Reflex angle.

The angle is said to be complete angle,  If an angle id formed by rotation ray, after making a complete revolution, coincides with the initial position.

Thus, the angle whose measure is 360o is called complete angle.

In the above figure, the arm OP coincide with the arm OQ after making complete revolution. 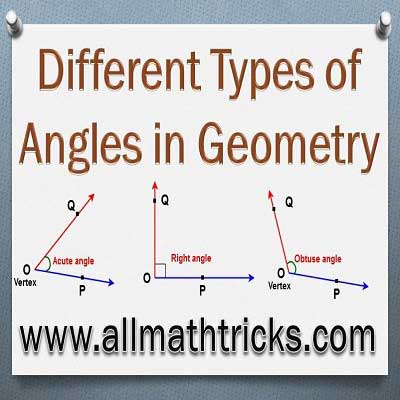 Types of Lines |  Lines In Geometry  |Straight and Curved Line

Ray along with their types | Line segment math definition |

Classifications of Triangles with properties

Types of Quadrilateral with their properties and formulas

Arc, Perimeter, Segment of circle Properties of  circle in math

Thanks for reading this article. I Hope you liked this article “Different Types of Angles in Geometry”.  Give feed back, comments please.